I fell in love with this author’s fiction when I reviewed ‘The Nightfarers’ here: http://weirdmonger.blog-city.com/the_nightfarers__by_mark_valentine.htm
And I fall more deeply in love with it by the addition of this story to his canon. Lovecraftian texture, or M.P. Shiel, but predominantly a highly clause-tentacled and wordy, if piquant, style that is a unique Valentine-doux admirably suiting this tale of a Magus who collects prodigies in what I have learned to be Meyrink City as a Platonic Form – eventually shading off into (then majoring as) the tale of one of these prodigies, a young lantern-painter who learns to look below the lanterns he paints and meets a procession of life’s lessons in the shape of tasking people. Not a Pilgrim’s Progress so much as a Dreamer’s Duress made sweet with a meaning only you the reader can blend. If that reader is Meyrink himself then I’ve found this book’s ‘literary being’ at last ... myself? Or yourself? (26.12.09)


Modern Cities Exist Only to Be Destroyed - Michael Cisco

"The train glides into the station. The doors part like buttocks."

Carrying on an Autumnal of the 'Dreamer's Duress' from the previous story, a Pilgrim called X enters a Ligottian synaesthesia and a reality that needs an engineer as all is potentially Machine. And a Magus Meyrink who leads the Pilgrim towards Knowledge. A clever story of Meyrink City with tasking commuters and a train - leading to a possible symmetry of two trains. There are sharp phrases from time to time that awaken the reader - the reader who develops apace as this book does. Each story standing on the shoulders of the previous stories to reach the cabinet-panel in the Wellsian, if not Wailing, Wall. (26.12.09 - two hours later)

"I have made extensive notes but the more I try to detect a pattern the more it eludes me."

A further effective Autumnal (judging by the dates), this time of epistolary cabinets - invoking another Absurd Theatricality acting out a reality of darkness and truth. An unrealistic Theatre performing the part of a realistic Theatre. Or vice versa? The epistles' scholarly protagonist finds out the answer. And so do I. Meyrink as inner playwright.

"The walls of my room here have become a map of those events yet it is the blank spaces between the pages pinned to their surfaces that still haunt me." (26.12.09 - another 4 hours later)

“He had absolutely no hope or optimism for his own future, and yet it was a future he looked forward to with great anticipation.”

A haunting (non-1984) Orwellian treatment of Meyrink City (just after the 1st World War) with Praguesque, Londonian, Parisian resonances, whereby (Eucharistic?) blood and “architecture of ruin and rust” (Cinnabar? Chrome Dioxide Magnetic Tape?) of the City as the engineered Machine are hinted at, in some further ‘chess sacrifice’ of down-and-outs for the gnosis-alembic belonging to the book’s Meyrink, allowing this very Meyrink to continue forming theosophically as a further warm-up act for its very reality-in-your-(the-reader’s)-room. “Cinnamony dust” and insects... (26.12.09 - another 2 hours later)

.
The Cabinet of Prague – Mark Beech

The ‘psychotrope’ of miscegenation. This cleverly combines the book-magical library-lore of a Carlos Ruiz Zafón and the naïve initiation of a chance street-adventurer from Stanley Kubrick’s ‘Eyes Wide Shut’ as he becomes out of his depth ... here endangered by the actual fiction text that describes his Praguesque rite-of-passage from family to exile. A story that wonderfully tells of being the very thing that is most threatening to its protagonist, i.e. a story that the reader cannot ‘penetrate’. A City as a symmetry in pain. Eventully to be encroached by another City whose wholeness as a single word is divided by a river.
“ ‘...the true intent of the writer lies between the lines...’ ” (26.12.09 - another 4 hours later)

White Souls that March in the Astral Light – Jonathan Wood

“There is hunger now for certain strange knowledge in this society where so many have died so young.”

At least partially in tune with the visionary fiction of Arthur Machen, this is a heart-breaking story of London amid the guilt-passions of the First World War, with Theosophy and Christianity and Decadence -- ‘or’ Life and Death and the insidious state between them -- fighting their own tri-partite battle for literary angelhood. It creates a fulcrum of intense text-effulgence that is not just about a séance but is a séance.

Alongside the efforts of some ectoplasmic ‘slop’ on a puppet-string, this story seems to combine many of the threads of this book so far: e.g. “You were their heavenly Father, their beloved uncle here upon Earth”, “...his expectation of a deluxe copy of ‘Lanterns of the Astral Complex’”, “rusted guttering”, “the dissector’s table, where blood runs so slow”, “concupiscent maid”, “a thousand beloved and symmetrical faux Father-priests reflected back and back upon one another”, and (not mentioned so far in this review but apparent heretofore in the book) the implicit faces on banknotes. (27.12.09)

"...Nowak did not greatly love the unnerving slow malice of Webern, the subdued and cryptic control which seemed to hide violence."

This is a delightfully funny but significant piece regarding The Reality Meyrink in which this book is steeped, both historically and spiritually. Harkening back to the 'magnetic tape' of an earlier story, I really enjoyed this tale of a writer using a wax dictating-machine to write an article on a Meyrink who had given him the machine in the first place - enjoying its novelty, experimenting with sounds of birdsong but also annoyed at his neighbour's chants across the wall. I'll leave the reader to discover exactly what happens.

But this story took on new heights and depths for me on a personal level. I mentioned earlier in this review the Large Hadron Collider (a future 'engineering' of the dictating-machine?) and the recent serious scientific theory that it is sabotaging itself from its own future. And the real news of the bird that temporarily halted it by dropping bread into it. This story now lends retrocausality to that very retrocausality! In addition, there is the 'Turn the Crank' story in 'Cern Zoo' ... and think of 'Cone Zero'... This is all too good to be true. I can't believe it! I feel that not only is this book on a roll, but I am, too, by reviewing it.

"Our perceptions and selves are arbitrary, fragmented.... like Europe itself, we are all continuously tearing ourselves and each other apart..." (27.12. 09 - two hours later)

[Talking of the 'Cern Zoo' book, this author is one of its authors.]

And this story is a tale of a Frenchman on holiday in what I see as a Proustian form of Prague being led in a Dreamer's Duress, if not upon a Pilgrim's Progess, by the story itself in the guise of one of its own protagonists through the city's ambiance of tasking inhabitants towards a wedding and this book's Meyrinkian reality - where symmetry is more than just pain. A wedding as collider? Very evocative with gem-like prose. (28.12.09)

"The junk shops and dustbins were overflowing with discarded treasures, leaving the houses free for the incoming tide of ugly, cold, soulless furnishings that were the latest fashion."

Here the book's Meyrinkian reality is cleverly transported, amid Lovecraftian miscegenations of hatred and envy, into the English reader's heritage of Richmal Crompton and 'Just William'. The Meyrinkian power of this book is to open a Cabbalistic synaesthesia of tongues and loosely cousined religions and literary decadence within even our most mundane or once youthful readerly minds that have forgotten how old one must be to be erudite or sensitive enough.

The come-uppance of the boys described in 'rusty ink' takes its textural toll as text. I find it difficult to forgive even the sympathetic I-protagonist let alone the nasty boy who accompanies him on this mischievous foray into a private Semitic domain as accessed from the city's roofscape. All brilliantly described by a narrator who has lexic power beyond his apparent youth. Only the retrocausality and insight of hindsight and of later learning can summon such detailed boyish antiquarianism. And a wonderful half-glimpsed stone monster. (28.12.09 - two hours later)

This is another Autumnal (judging by the dates), not epistolary this time, but a Journal in real-time that seems aptly at this stage to parallel the endgame of this real-time review itself, a review of the book in which this journal sits like a wind-swept, loose-limbed Island in denser Meyrinkian seas. I feel tempted to make my review follow the intent of the story's narrator: "I will hide this journal, unsigned or otherwise identified."

It seems to be this book's context-untypical tale of an occult search surrounded by a wild, yet neatly delineated vision of the Scottish Islands and the High Church of Christian and non-Christian symmetry. It is a piece of Baxian music. A Fall from Grace or nearly so with enticing young feminine charms set possibly to make the Journal-keeper forget those older charms of a woman he mourns. Airy yet opulent descriptions. Meyrink as Centaur? Delightfully old-fashioned, with a sense of wonder as an aftertaste. (28.12.09 - another 2 hours later)

“I hesitated, my very soul in that hesitation.”

This is the longest story in the book, almost novella-length. It is extremely powerful, and, if not ‘deliciously bleak’, numbingly nightmarish. I recently reviewed the author’s ‘All God’s Angels, Beware!’ HERE and I honestly believe myself, as a result, to be a changed reader forever, if someone of my age can be changed for good or ill.

‘Tzimtzum’ is the Dream’s Duress at length and, for the previous story, is the finding of ‘the last of the charnel cairns’ and, for the book as a whole, ‘the spiral of my pilgrimage’ towards summoning its words into its 'literary being', the Meyrink that becomes me ... or becomes the ‘nameless You’.

There is too much else to only-connect or to draw to your attention in this story, in this whole book, this review being a sort of inner absurd playwright of the critical spirit.

Porridge or Urine, the circle is complete, ‘Of Human Bondage’ towards a literary darkness as a version of retrocausal self.

I seriously believe that this book as a whole is a significant landmark in the history of Weird / Horror Literature.

I shall now privately read the Biographical Notes at the end of the book for the first time, hoping they may give me further food for thought.

Posted by Nemonymous at 11:13 am No comments: 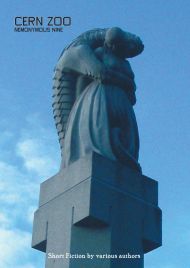 The CERN ZOO book (June 2009) originally based as an anagram of its prequel books CONE ZERO and ZENCORE, with 'Cern Zoo' *subsequently* found to be real terminology from 1995: http://www-d0.fnal.gov/~gwatts/ud0/past_speakers.html


The CERN ZOO book contains stories about the Cerne Abbas Chalk Giant and the Large Hadron Collider and Zoos. My comments on the stories from a real-time review http://weirdmonger.blog-city.com/cern_zoo__a_dfl_realtime_review.htm on 17 October 2009 that take on a retro-causal significance in the light of links below.


November 2009: HADRON COLLIDER'S OWN SABOTAGE FROM THE FUTURE - VIS-A-VIS 'CERN ZOO' plus bird with beget bread. AND NOW (Nov 25, 2009): BERNE ZOO INCIDENT AND NOW (10 Dec, 2009): NORWAY SPIRAL LIGHT. Links above that are astonishing connections that the book makes between the Large Hadron Collider and events in the world.

The importance is not in the cause of events but that they happened at all to make a perceptible pattern of connections.
Posted by Nemonymous at 10:21 pm 2 comments: