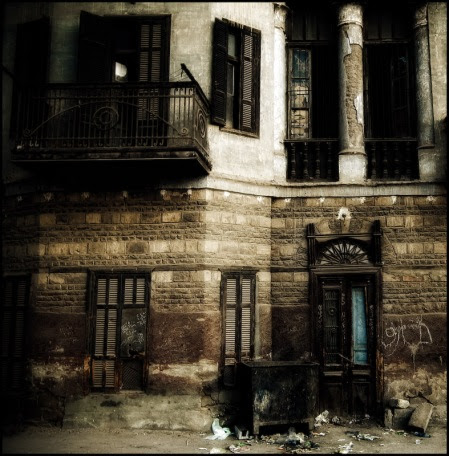 I am pleased to report that, very soon, a pdf preview of the forthcoming DFL definitive fiction collection - 'The Last Balcony' - will be put up at the Ex Occidente Press site HERE


I am also kindly allowed by Unsettled Dust to use this wonderful photo (from HERE) in connection with this book. This is a photograph that has no connection with me or with the publisher. Its own title, I've been told, was inspired by the book title.

Posted by Nemonymous at 12:47 pm No comments:

When, at the end of the day, a weirdmonger cleans his slab with pride, he sees clearly from which balcony the next wave will come.

http://unsettleddust.wordpress.com/2010/01/21/one-photograph-the-last-balcony/
Posted by Nemonymous at 8:32 am No comments:

When, at the end of the day, a fishmonger cleans his slab with pride, he worries from which weird seas the next fish to sell will be coming.
Posted by Nemonymous at 5:44 pm No comments:

When I write, I feel like I'm a band playing in my garage.

Brashly eclectic, but I know they're trying to perfect their art, so I put up with it.
Posted by Nemonymous at 7:31 pm No comments:

Maybe, one man's obfuscation is another man's struggle to express the inexpressible.
Posted by Nemonymous at 10:18 pm No comments:

I knew that – soon – based on previous experience here, it would be full of meat & two veg. I’ve never known a cafe that simply plants a plate like that on the table and then has food dished up by the waitress piecemeal from saucepans on her trolley. Posh restaurants, maybe, do that, where a flaming piece of animal is often brought to the businessman’s trough, with a huge sizzling noise and billows of smoke. But never two-bit cafes like this one.

The waitress was done up as if she still lived in the past and travelled in Third Class carriages. Her saucepans steamed biliously like trains themselves. Her voice was in broken English, meaning she wasn’t even one of us. She told us about her troubles as she ladled the bits and bobs of tasselled bone in gravy. A thick accent that we could cut even with the blunt carving-knife that she then brought out to slice the still whole swede sweating nearby.

I nodded my head with my own version of small talk. My companion – a nondescript lass I’d met inside the cinema – merely tried to look pleased that I had taken her here for a meal. Going to see a continuous programme of 'Brief Encounter' and a B Film had left us with an appetite that would even salivate at soggy leavings in a plug-hole.

Soon, the plate was empty again. Every word eaten - & left a blank plot and nobody even to read it, let alone write it, if that was the right order.

Alone, I headed back towards the cinema – and now found it to be a car-park.


(written today and first published above)
Posted by Nemonymous at 7:02 pm No comments:

Matt Cardin has written some wonderful thought-provoking articles on the Muse or Daemon and the creative collaboration within self etc.: HERE in three parts. I recommend them to you.


They touch on some concerns that have preoccupied Nemonymous over the years and the Intentional Fallacy and The Ominous Imagination in Magic Realism and Magic Fiction. If one explores all my blog posts for example one may lose oneself forever in such concerns! :)

Some quotes I hold relevant to this subject:

"My pictures are visionary and symbolical, and, from first to last, have seemed to be painted by someone other than myself. [...] I am thus entirely self-taught, or taught by that other within me. I am aware that my pictures lack serious technique(if there is a technique that can be distinguished from inspiration and invention). I should have given up painting them some time ago, were it not that a certain number of people seemed to find something remarkable in them, and have thus identified me with them, and made me feel mildly important."
FROM "RAVISSANTE" BY ROBERT AICKMAN


"From the cosmic point of view, to have opinions or preferences at all is to be ill; for by harbouring them one dams up the flow of the ineluctable force which, like a river, bears us down to the ocean of everything's unknowing. Reality is a running noose, one is brought up short with a jerk by death. It would have been wiser to co-operate wih the inevitable and learn to profit by this unhappy state of things - by realising and accommodating death! But we don't, we allow the ego to foul its own nest. Therefore we have insecurity, stress, the midnight-fruit of insomnia, with a whole culture crying itself to sleep. How to repair this state of affairs except through art, through gifts which render to us language manumitted by emotion, poetry twisted into the service of direct insight?"
from 'The Avignon Quincunx' by Lawrence Durrell ('Constance' 1982)

"The nemo is an evolutionary force, as necessary as the ego. The ego is certainty, what I am; the nemo is potentiality, what I am not. But instead of utilizing the nemo as we would utilize any other force, we allow ourselves to be terrified by it, as primitive man was terrified by lightning. We run screaming from this mysterious shape in the middle of our town, even though the real terror is not in itself, but in our terror at it."
-- John Fowles 1964 (from 'The Necessity of Nemo' in 'The Aristos')

[[Pretension is the dismissive name given to people's attempts to be something
other than what they 'really are'. It is vilified in England in particular
because we are so suspicious of people trying to 'rise above their station'.

In the arts, the word 'pretentious' has a special meaning: the attempt at
something that the critic thinks you have no right even to try. I'm very happy
to have added my little offering to the glowing mountain of things described as
'pretentious' - I'm happy to have made claims on things that I didn't have any
'right' to, and I'm happy to have tried being someone else to see what it felt
like.

I decided to turn the word 'pretentious' into a compliment. The common
assumption is that there are 'real' people and there are others who are
pretending to be something they're not. There is also an assumption that there's
something morally wrong with pretending. My assumptions about culture as a place
where you can take psychological risks without incurring physical penalties make
me think that pretending is the most important thing we do. It's the way we make
our thought experiments, find out what it would be like to be otherwise.

Robert Wyatt once said that we were always in the condition of children - faced
with things we couldn't understand and thus with the need to guess and
improvise. Pretending is what kids do all the time. It's how they learn. What
makes anyone think that you should sometime give it up?]]

Just sigh and read only the texts themselves to discover all the necessary and available elements of the 'thing or things' behind those texts?

In line with the Durrell quote above, I struggle to find my own opinion to answer those questions!
Posted by Nemonymous at 8:58 pm 1 comment: