Jungle J.D.
“It was like living with dead people.”
When I finished reading this story, I uttered aloud: “Wow!”
What a story, I thought, how can I possibly categorise this, ‘gestaltise’ this, chase the noumenon of this, because, simply, it’s its protagonist Tony’s “it”! The “hypo” of the “hippo”.
Any story that features the 1960 record ‘Runaway’ by Del Shannon — that was so significant in my life at that time, playing it almost incessantly, as I did, on my Dansette auto-change — cannot possibly fail, even if it’s completely above my head. This is a significant gem of literature for me, with its rocking and rolling cruising of boy and his gal in his kooky car, the sudden crash and the wild alternate post-war Nazi-Tarzan future that we all missed because we weren’t killed. Well that’s one interpretation. A seriously politically-incorrect gig that makes me think I am in a dream – or nightmare? Or literary Heaven? Ungawa!
[His gal's name is Joy. Well, here's a story I had published in 1998 that also features Del Shannon, called 'Joy Rider'!!!]

An excerpt from my real-time review of ONION SONGS (Chomu Press) here.

Posted by Nemonymous at 7:08 pm No comments:

As I leant on my walking-stick, I watched him as he inched nearer to the goods behind the glass. It was as if he were slowly measuring the pavement rather than preparing to window-shop.

His steps were so methodical he sometimes back-tracked them and then started new steps from a precise point marked by a crack in a paving-slab or a hardened smear of a substance that once must have been chewing-gum - or that was the least unsavoury assumption to make about such a smear.

Eventually, after much toing and froing, he reached the pane's closed threshold, so near to it that his nose was almost pressed up against it.

I could see he had been counting silently to himself - much like small children do when mouthing the words they read, head lowered close to the page to prevent anyone spotting them thus mimic the shapes that were configured against a sea of white.

"How far was it then?" I dared ask, while leaning the time of day against the support of my stick.

He pretended not to know me. In fact, pretence wasn't hard, I guess, as I was a complete stranger poking my own nose closer and closer with each jab of my words.

I assumed he was a local council official, despite what I estimated to be the late Autumn of his years. Why else was he pacing the pavement so painstakingly if not to divine some need to narrow or widen it? Surely, he would be using a graduated yardstick purposely marked out with strict stages of significant scope. That would have looked far more professional.

"Are they going to move the road nearer the pavement?" I asked, while waving my stick officiously. I was ever alert for local council shenanigans in our town. I didn't approve of ANYTHING they ever did, WHATEVER they did.  My letters were often in capitals when written down. Widening or narrowing, just as despicable as each other.

He turned round to face me, forcing me to realise that my stick-waving had been wasted ... Until now.

But perhaps he had been window-shopping after all. Or, as it turned out, being window-shopped himself, the meted-out steps having been just a means to delay the inevitable.

Before I could even blink, two men in shop-soiled white coats emerged from inside and dragged him to the business-end depths of the establishment.

"Cheap at half the price!" I shouted out, victory in my voice. I now saw it was a butcher's shop, where bones often cracked audibly at night, if there was anyone about to hear them.

Supplements for the food chain. Off-street curmudgeons were second-best to horse meat, but hardly anyone ever noticed.

I suddenly felt the urge to touch heel to toe, the business-end of my notched stick ready in hand.

Posted by Nemonymous at 2:32 pm No comments:

“…Hans Castorp went on, and laid his hands like a lover on his heart, ‘if I only knew why I have palpitations the whole time – it is very disquieting; I keep thinking about it. For, you see, a person ordinarily has palpitations of the heart when he is frightened, or when he is looking forward to some great joy. But when the heart palpitates all by itself, without any reason, senselessly, of its ow...n accord, so to speak, I feel that’s uncanny, you understand, as if the body was going its own gait without any reference to the soul, like a dead body, only it is not really dead — there isn’t any such thing, of course — but leading a very active existence all on its own account, growing hair and nails and doing a lively business…’”
--from THE MAGIC MOUNTAIN by Thoma Mann.

Quoted in my real-time review of this book here: http://dflewisreviews.wordpress.com/2013/03/18/the-magic-mountain-thomas-mann/
Posted by Nemonymous at 10:22 am No comments:

Close Intrusions of the Third Kind

Read it between jumping and hitting the ground. The last balcony, you see, is at the top of a building with many stories…

“I already know that I’ll be recommending it most highly to any and all readers who love original weird fiction…”
– RHYS HUGHES, from his review of ‘The Last Balcony’ HERE

I’ve owned the rare book INTRUSIONS by Robert Aickman since the 1980s but I can’t remember having taken it off the shelf since first reading it (all its stories are contained elsewhere). I had occasion to look at it recently and was amazed at the wondrous synchronicity between its front cover and that of ‘The Last Balcony’ (2012). On consulting Tony Lovell (the artist who shaped the real object photographed for the ‘Last Balcony’ artwork) he also drew comparison with the shape he created and photographed for the cover artwork of ‘Busy Blood’ (2012). We’re both pleasantly surprised at this inspiring correlation. Perhaps we should call this the ‘Close Intrusions of a Third Kind’ syndrome?

The ‘Intrusions’ cover in 1980 is by Andrzej Krause (Andrzej Krauze?)
Posted by Nemonymous at 2:47 pm No comments:

A Bridge of Green Books

Hal decided to build on one side of the river first, stacking each book on another; he was surprised how many books he had with green covers, paperbacks and hardbacks, the latter with green dust jackets even if their inner board covers were anything but green.

To be any shade or all shades of green on the outside was his only prescription for the books he used.

But once he had deemed the tower of books to be tall enough, he suddenly knew he wouldn't be able to complete the bridge without first crossing the river's wild currents by means of the completed bridge.

Hal picked up the randomly unused book that he had left out on a whim as he thought somehow that it would have been the last straw, as it were, to topple the tower. He opened it at any page.

He read it with interest. Words were a sort of bridge towards meaning. Or towards each other.

'Why build a bridge with books?' Hal thought, as he eventually looked up. 'There must be a better way.'

He saw a figure on the opposite bank who was building a tower of his or her own as if to prove the point. And those books didn't look to be green at all. 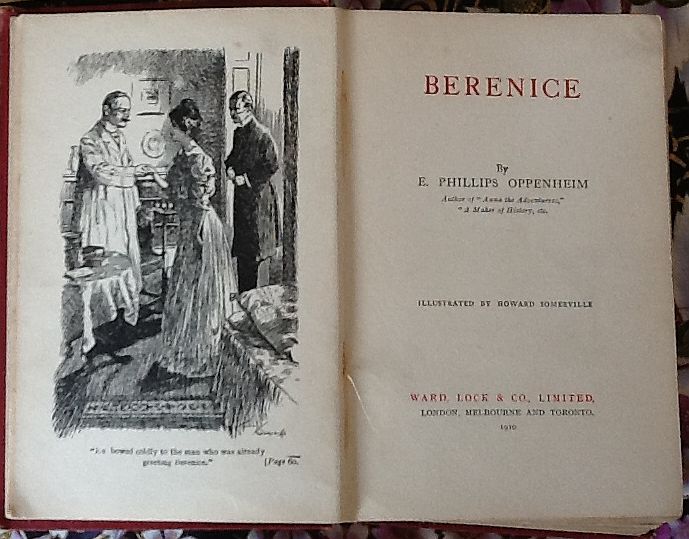 Also, the name of a famous opera by Handel,

the Empress and University in 'The Warriors of Love' novels,

the daughter of King Herod Agrippa,

another actress who once played a Bond girl,

a famous photographer who died in 1991,

a novel by Johannes Themelis,

a character in a Jilly Cooper novel,

and, with her hair, a constellation of stars - a name as a pattern of infinity. 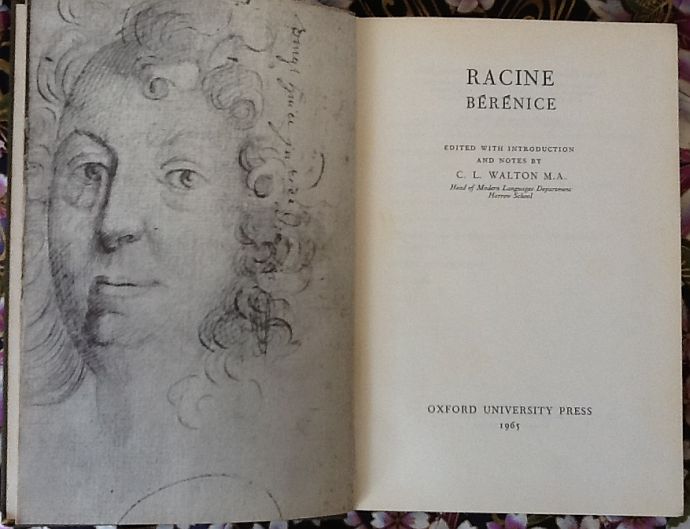 A name literally meaning THE BRINGER OF VICTORY. 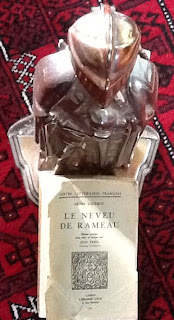 “…like a motionless Chinese idol from beneath whose chin a string hangs, leading down under his chair. One waits for the string to be pulled, but it is not pulled; or, if the jaw happens to open slightly, it’s to utter some disheartening words, words which tell you that you have not been noticed, and that all your antics are wasted; the words answer a question you asked several days ago; once they are uttered, the mastoid spring relaxes and the jaws snap shut…”
“He wept, he laughed, he sighed; he gazed tenderly, or placidly, or furiously; he was a woman swooning with grief; a wretch overcome with despair; a temple rising up from the ground; birds falling silent at sunset; rivers murmuring their way through cool solitudes or cascading down from high mountains; a storm; a tempest, the moans of the dying mingling with the whistling of the wind and the crashing of the thunder; night, with its darkness; shadows and silence — for sound can portray silence itself.”
“If I’m alone, I take up my pen, I try to write. I gnaw my nails, I rub at my forehead. Nothing doing. Good-night. The god’s not at home. I’d convinced myself that I had genius; at the end of the first line I read that I’m a fool, a fool, a fool.”

Posted by Nemonymous at 9:33 am No comments:

"Le Neveu de Rameau" by Denis Diderot, that I read many years ago, is a rambling philosophical dialogue that, I suddenly realise, seems to show the value of what I have long called the synchronised shards of random truth and fiction. Did this book invent brainstorming?
Posted by Nemonymous at 9:43 pm No comments:

Posted by Nemonymous at 9:19 am No comments: