The Far Side of the Lake – Steve Rasnic Tem

"Charlie Goode was a great believer in synchronicity."

The next Ghost-Hunter story seems to me to be the natural, yet unpredictable, progression of this book's inter-generationality theme towards an absurdist but - due to this book's 'magic fiction' as opposed to mere 'magic realism' alone - highly believable culmination. Via the imputed cryologies of 'gradual' bereavement and by means of 'passing on' rather than being 'lost' or vanishing altogether during the death process, here the powers let loose by the 'Ice House Pond' give their answer to all Ligottian nihilism by embracing that nihilism: by stitching music from snowflakes: allowing fiction to be our religion, tantamount. Seems to be synchronous with my 'relaxed snowman' photo above that was placed on this site around 5 Feb  before I started reading this book. Do work through the logic of this story together with the foregoing backstories, and you will see, I hope, what I see in this story.  There are some incredible descriptions of those hanging on to death and thus to life - 'playing' in the snow. It is simply a gem of a piece that needs to be read before you are lost or pass on yourself.  Or possibly keep it unread, and you will never die? Meanwhile: "Inside, Charlie found Bobby helping Jimmy dump several boxes of old books and knick-knacks into a large crate labelled TRASH." (15 Feb 11 - two hours later)

From my real-time review HERE

A novella-sized tour de force. The male protagonist says the pond is much bigger than it is. A strange statement. [But this ebook is much bigger than it is, too. I had no idea how big when I started it - unlike with a real thick book in your hand as you riffle through its pages assessing its scope. Certainly got my money's worth.] Thus, by means of that ostensibly strange statement, sharing the previous story’s boy’s larger-than-life or imagino-kinetic abilities and whose ‘fog’ trope is now here to be frozen. The male protagonist (who suffers his own past of inter-generational tragedies of wife and daughter in a car accident and more) takes over a desolate ice-property (you have to read this novella to appreciate the enormous stunning scope of that expression, that ’ice-property’ concept in real cold-numbing, cold-abrading, shard-tall grandeur as well as this book’s erstwhile seedy ‘Leaks‘ potential infecting that grandeur, the erstwhile ‘Underground‘ and its ‘hawling’ images, its death-sacrifices to prevent suffering, the purging of past sorrows by creating today greater sorrows or diseases that are paradoxically easier to bear, the Concentration Camp gas ovens [that map-maze with yellowish haze the "mad scientist's" inner earth of my aforementioned 'Nemonymous Night' by dint of its sister novella 'Weirdtongue']; the Ice House’s inner scrying cryological crystal-ball shapes both sickishly mutant and ripe with potential stunning palaces of magic realism (not unlike that sometimes evoked by ’Oscar and Lucinda’ in retrospect) – “…the cold had the presence and intensity of stone” – the ‘genius loci’ of the house, ice pond, ice house that he’s bought, complete with nursery, is via cumulatively powerful prose, or rather an ice-genie-loci? The sun like a huge white eye in the sky reminding me that it is my eye scrying the white screen of this novella (it’s white on my screen). ”Magic ice“. “Ice palaces“. This is Greystone Bay again, now complete with a hinterland of the missing people that the ice has taken and turned into self-redemptive ghosts (your self, not necessarily their selves). An ice house with the scope of a literally global shock, too. Ice block, “love breath” (sharing a bed is important on Valentine’s Day of all days, and I agree with what this novella says so touchingly on this score!). “The oldest cold”. The madness-veined ice-walls. Can memories be frozen like food? (My question, not the novella’s). Fishermen fishing for painted fish (still waiting for something to happen?). Can you tell I’m impressed? Yes, I particularly resonate with the cruel kindness of such fiction. It is replete with traditional stylisms of the Horror fiction genre; it’s as if the artificial world built up cumulatively like an ice sculpture, striking image piled upon striking image with feverous authorial gluttony; it never actually goes over the top because of those genre tropes employed so skilfully, even though it may go over the top for some not accustomed to such literature; and it will melt like all great ice sculptures will inevitably melt as my memory fades with the onset of old age and even my sadnesses will be numbed by the coming ice beyond any melting. Accepting that is like appreciating what makes you accept that. Like this novella. There’s even a bookshop in it with real redolent books waiting to be riffled through. Only global catastrophe will destroy them, I guess. (14 Feb 12 – another 4 hours later)
Posted by Nemonymous at 3:25 pm No comments:

Underground - by Steve Rasnic Tem
A substantial Tem story, without a doubt, and, for me, a personally important one that (like all the stories in this book so far) I’ve just read for the first time. It carries this book’s own internally connected themes plus a pre 9/11 ground zero (or cone zero – see another Nemonymous volume that preceded cern zoo), here a seemingly deliberate building construction hole, with encroaching themes of that hole ineluctably being out of control, and themes concerning explicitly stated statues, ‘tree-men’, travel to ‘earth’s core’, the swimmability within ground or earth [and in my novel 'Nemonymous Night' it is flyability in the earth as well as swimmability! - a novel, for me, felicitously and coincidentally and differently resonating with Tem's 'Underground' as perhaps encapsulated by the concept of what I call 'hawling'] – and the poignancy of ‘difference’, sexual prejudice and many other factors I could enumerate. Here quite brilliantly connected within Poe’s premature burial fear – and a bereft sense or fear of leaving no descendants (note that word!), even too fearful to leave one’s dead body so as to mulch the future? Hence, that bereftness, too, perhaps, when there is no inter-generationality by enforced personal proclivity, i.e. no potential posterity. It’s as if we’ve been led artfully to this point by the previous stories, whereby the meticulously caring among us can now be shown how to care horizontally as well as vertically. You will know what I mean. An intensely caring literature. And so much more, too, like messages not getting through. This one, for me, did. But one needs to read literature with all these moments of meticulous care in their cumulation so as to reach such a point. A ‘hawling’ of emotions to the surface so as to optimise their message, empowering it even further by making readers work hard to ‘hawl’ the meanings free from their clinging roots. But God knows, even optimisation is often not enough. We can only do our best. A story for our times. And for the moving ’dead’ in the Guest House of our soul. (13 Feb 12 – another 90 minutes later)
Posted by Nemonymous at 3:52 pm No comments:

I have now finished Nemonymous Night. And, on another level, have come to terms with the fact that I have scarcely read it at all.

That is a quote from the book's excellent first review.
One can't dare hope for this book to be read at all, then?

The HA of HA - stock-taking so far 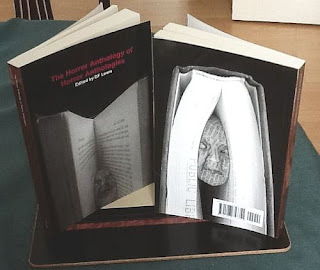 Enthusiastic response since this HORROR ANTHOLOGY OF HORROR ANTHOLOGIES was first published in June 2011.
All reviews linked here: http://horroranthology.wordpress.com/ha-of-ha-reviews/
I have a few copies of the above book – and the one  here - available for anyone who is willing to review either or both. Please contact me at dflewis48@hotmail.com
Posted by Nemonymous at 1:30 pm No comments:

Contains the first recorded use of the word 'Aickmania' in the comment today on the second link above.

EDIT: Maybe not the first recorded use as someone may have used it before on Googlegroups.
Posted by Nemonymous at 8:21 am No comments: