An extract from my review HERE.

“‘When I go to Parliament,’ said Jenny, ‘I’ll abolish clouds. And I’ll live on cakes and peanuts! And when I’m full, I’ll jump up and down until I’m sick and start eating again!‘”

The older I get, the odder. But never as creatively and constructively and dyslogically odd as Rhys Hughes or, at least, Rhys Hughes’ work. This is genuinely one of his greater pieces (and quite different from, if the same as, most of the other works I’ve read of his); good job! It takes up about 30 pages of this Journal. Worth every page. It starts off with Jenny as a wonderful new take on Jane Turpin (by Evadne Price), a young girl version of Richmal Crompton’s ‘Just William’, but better. And it evolves into a major satiric, Lewis-Carrollian ironic-fantasy: absurdist, hootingly funny, with at least half serious undercurrents about Parliament and voting, and power, and monarchy, and the Middle Class, and Machiavelli: with so many wonderful new Rhys-Hughesian conceits: eg: Alky / Alchemist, Jingo /Bingo, buying years for the amount of their numerical ‘name’: with all manner of larger-than-life characters and references like the one to the Guy who tried to blow up Parliament: and Whovian statue-blinks, Whovian mayhem in Westminster, slime things underground etc. Even a version of Facebook for Dictators. And much much more. The prose is plain and short-paragraphed (not usually to my taste), but the ideas scintillate. And it’s thought-provoking, too, if you have any thoughts to be provoked. It even has childish conceits, to go with the more clever ones, like not finding any kangaroos in a kangaroo court. And the ending is not bathetic. It’s almost touching.

Posted by Nemonymous at 3:20 pm No comments:

﻿
A reprise of John Magwitch's discovery of a possible cannibalism theme in Robert Aickman's stories. NB: in the comments to the blog link below, I discovered that the Magwitch character showed cannibalistic tendencies in Great Expectations!
http://nullimmortalis.wordpress.com/2010/11/12/john-magwitchs-thesis-on-robert-aickman-cannibalism/
Posted by Nemonymous at 8:05 pm No comments:

'Last Balcony' closer to home than I thought 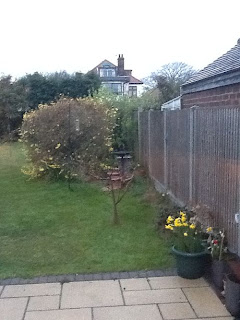 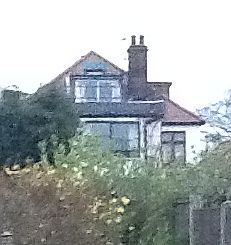 Overlooking my own garden. You can just see the balcony bars across the top window - and, although you can't see this very clearly in the photo, they stretch for the length of the balcony base that extends to the right well beyond the right-hand edge of the chimney stack.  I hadn't noticed this before today!
﻿
I think it was hidden by trees till a dose of tree surgery recently.
Posted by Nemonymous at 7:44 pm 2 comments:

Having stumbled upon it yesterday, here is Jeff VanderMeer's interesting ‘speech’ published in ‘Nemonymous Two’ (2002) about his story “Mansions of the Moon” being accepted for ’Nemonymous One’ (2001) under its terms of late-labelling:

"I submitted to 'Nemonymous' under a female pseudonym from a fake hotmail account. I took great care to alter my 'speech' in accompanying emails and I believe the editor was fooled until he sent his acceptance and I told him. This sense of play in itself gave me great pleasure. Whole experience of having my work read anonymously and accepted anonymously was pleasurable. I've enjoyed even more the reactions of people on various messageboards as to the identity of 'Mansions of the Moon''s author. I think when you take the personalities away, especially within genre, where everyone knows everyone, it allows for an objectivity otherwise lacking. It allows readers to see my work as a whole in a new light, based on 'Mansions', and it allows the reading experience to be somehow more innocent and pure. You also find you don't know as much about other writers' styles as you thought. I guessed wrong on several of them. Finally, the design of 'Nemonymous' fits the graceful simplicity of its concept to a tee. In short, I have enjoyed the entire experience.
"My latest book is 'City of Saints & Madmen', available in trade paperback from Cosmos and hardcover (with lots of new material) from Prime. I am a member of Storyville."
Posted by Nemonymous at 7:05 pm 1 comment:

Extract from my real-time review HERE.

From “The one notable exception” to “Even the ones you supposedly loved.”
“…playing out your endless power games, that you managed to trample everyone else.”
This is one Hell of a book. Teasing me just as vigorously as I am teasing it. Or teasing him, that Lewis bloke playing the ‘endless power games’. Now incrementally an authority figure (following a Mayoral election plotted in the Chestnut Garden (cf David Cameron’s Rose Garden appearance with Nick Clegg), an election, no doubt, similar to the very strange Mayoral election going on at this very moment between Ken Livingstone & Boris Johnson in an increasingly Olymp-mythic London), not black and/or white (literally as well as figuratively), allowing us to be embroiled in creating Paul Dent the new Winston Smith: who is in fact, obversely, creating us in return? Lewis and Paul: symbiotic? But who the host and who the parasite in such a (mis-)synergy? And a Revolution: an essential miscegenate Revolution from the ultimate role-playing about the American Civil War in artistic Struwwelpeter-Screwpine retrospect for which only reading the previous Hirshberg books that I’ve recently experienced for the first time can fully prepare you. All of this, for me, ties in very well with things in my long on-going philosophy (things, as a Hawler, I’ve often droned on about on-line for many years) about ‘Fiction as Religion’ and ‘”Magic Fiction” as opposed to Magic Realism’ and the ‘Synchronised Shards of Random Truth and Fiction’, and ‘Hawling’ (cf the pulley depot in the Bunk book earlier) and 'Nemonymity' etc etc (please google these terms, if you wish.) This is a major event for me, my reading this book. As it will be for you, I hope, even without the need for you to philosophise about its Creative Aesthetics! It is a SF Fantasy masquerading as a Literary Masterpiece of an Alternate World skewed Mainstream in turn masquerading as Zola-esque Naturalism as if written by Scott Fitzgerald! But we’re not finished yet. Things could still change. (7 Apr 12 – 9.40 am bst)
Posted by Nemonymous at 4:05 pm No comments:

From “I don’t know the beginning” to “‘Nothing here is really yours.’”

“‘So I just decided you might ought to put this place in your tourbook. Even if it’s not really a place anymore. Just in case one day … I don’t know.’”

And at Screwpine we reach some major plot hub that is susceptible, no doubt, to despoiling-by-review. Which I don’t intend to do. Suffice to say that, although I have been on various audit-trails with my Hirshberg reading-orgy of the last few weeks, I think I have reached a goal that somehow I knew I would reach: “‘A real Reconstruction.’” Not a parallel world. Not a Paul Dent, our protagonist, as Winston Smith, not even as a Big Brother manqué or some Wizard of Oz behind the controls, but certainly as a force even more powerful perhaps than the Lewis figure who dogs him. This Screwpine ‘hub’ and its ‘story’ seems to be a stunning geomantic vision that effectively stems from all the ‘points’ and inter-connections that each reader should discover for him- or herself heretofore, i.e. a different set of such spokes of the millwell-wheel for each reader, but always reaching some significant hub where we all arrive eventually in some Lost-type base with contraptions to tweak and dormitories of bunk-beds. And the possible arrival of a ‘Key’ writing-figure as an even bigger catalyst than any of us? The only way, perhaps, indeed, to review or simply discuss this ”Book of Bunk” is by some method of real-time mini-reviews written and imparted whenever we ‘choose’ breaks for sectioning or triangulating the text by the ‘Godgiven’ foibles and accidents of life and by the time-spans available for our creative reading amid all those other pressures of existence. We all do this naturally when reading any book but do we then cohere the cumulative piecemeal reactions that we find ourselves feeling? Do we aim for a single sweeping review after we’ve finished the book or for something far more special that only special books can summon or instil in us even beyond our own perceived ability to achieve? I hereby inaugurate, at this junction of the tracks, the Global Real-Time Reviewing Project. More of this later. Meanwhile, of course, I may not have reached this book’s ‘hub’ at all, having so far only read about 60% of the text. I do wish ebooks had page numbers! (6 Apr 12 – 4.35 pm bst)
Posted by Nemonymous at 5:03 pm No comments:

The Call of the Silly