Immortality takes on a new achievability 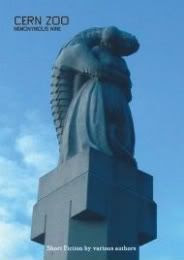 The retro-causal theme of Cern Zoo has, in many ways, been taken over by the later real history of the Large Hadron Collider as reported in the world’s various media during recent days and weeks. The bird with the beget bread in its beak now leading us, two by two, towards Nemo's Ark. The respected scientists who seriously proposed that the Collider was sabotaging itself from the future. Just symbols, perhaps, but they have given a new dimension that could not have been foreseen when initiating the Nemonymous ‘win immortality’ competition all those months ago: HERE
This unique competition is still open until 31 December 2009. And all its implications have yet to be played out while, even as we speak, new dimensions of the Cern Zoo open up day by day in parallel with real events.
It is not beyond the realms of imagination that the prize to be won now is not simply a fabricated, semi-laughable version of immortality, not simply a gimmick of publicity to underpin a ‘guess-the-author’ competition, but soon to become an immortality that is achievable. A fictionhead. Dr Who’s own water-park of forever. A flashy FlashForward.
After all, Cern Zoo was originally a near anagram of the previous Cone Zero and Zencore books, but it then beget from itself a hindsight destiny when a real professor duly gave a lecture entitled ‘Visit to the Cern Zoo’ on 4 February 1995: as indicated HERE.

Posted by Nemonymous at 7:18 pm