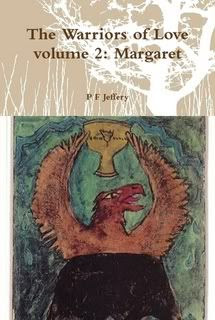 I am starting a real-time review of this book. I genuinely don't know how long this will take, whether days or years? Probably somewhere between! :)
Beware possible spoilers.

[All my real-time reviews are linked from HERE]


My earlier blog about the fiction of PF Jeffery: HERE

PFJ's library page about his 'Warriors of Love' books (of which MARGARET is one): HERE


These novels are complete in themselves and can be read separately, according to information from their author.

Chapter 1
" 'Ghosts have very sharp ears. They can hear a child breathing a mile away.' "
Predominantly, this chapter is a series of charmingly written dialogues between Margaret as a young girl and her Nanny, the former full of childish questions at bedtime and the latter often full of tales and myths (some frightening) to entertain her charge. This chapter starts to convey this fantasy world as if it is real. Indeed, the book literally serves to make it real.
Embroidery causes some talk of punishment: spanking. Interspersed with theories on 'slaves' and 'persons'. This aspect reminds me (perhaps me alone) of the phenomenon of Marmite. People who love Marmite can't imagine people who hate it, and vice versa. But perhaps more of that conundrum later in this review.
Of nanny's tales, I was particularly struck by the one about the nature of the Cracked Meadow. Brilliant. But they're all good. (3 Jul 10)
.

Chapter 2
"Plucking eight buttercups I placed them between my toes, contemplating the effect. They tickled a little. For a few minutes, the sensation seemed pleasant - then I decided that it wasn't, and removed the flowers.
'If you hold a buttercup under your chin,' Nanny Spencer said, 'and your skin looks yellow, it means that you like butter. I don't know anything about buttercups between the toes, though.'
'Perhaps it's something to do with buttered toast.'
'I suppose it must, my sweet.' "
More conversations and situations surrounding the young Princess Margaret with her nanny, her mother and with other figures seen precisely yet vaguely (an artful narrative indeed to convey a young girl's observations of the world around her gradually emerging for herself as well as for the reader) ... involving war, politics, philosophy, and the three S's within what I call the the 'Marmite' conundrum of PFJ's fiction: Sapphics, Slaves & Spankings ... and the womanhood (personhood not slavery) of which Margaret feels herself due to become part eventually.
I will not keep repeating this: the prose and dialogue are perfect. The language and its sensations will compensate (if compensation is needed) for any misgivings as to the potentially worthwhile distance you the reader must yet travel to live fully in this truly believable yet novel world. Without the travel one cannot hope to arrive. (4 Jul 10)
.
.

Chapter 3
"On my way downstairs, it occurred to me that - if Nanny Spencer had placed the boots in the cupboard - she presumably knew that I was about to be assigned to a riding instructor. Had she known, before I did, that we were to part? If so, why hadn't she mentioned it to me? The whole world seemed a grown up conspiracy against me."
A conspiracy against her like the impending novel itself? Poignant partings afoot, we are shown a fourth S in this chapter - that of the turning Seasons of this world, their smells and other truly felt senses. Also the continuing ritual, received with equanimity, of 'warm bottoms' as some metered custom of punishment or simple wear and tear like horse-riding.
I would now like to quote a sentence from the first chapter, as it is now coming home to roost for at least this reader of the narrator's narration and thus through it to the narrator herself (if not to the head-lease or freehold author whose name is PF Jeffery): "It is through language that we make sense of the world, and through writing that the sense is fixed.." For 'language', one may also read Princess Margaret's embroidery picture in Chapter 3! (6 Jul 10)
.

Chapter 4
"...titled with a small label in spidery script reading 'A Description of Surrey'. / The long word 'Description' defeated me, but my reading skills were adequate for the name 'Surrey'. Perhaps, I hoped, the part I couldn't read meant 'wickedness' - the s-c-r - suggestive of screaming, scratching and screeching - looked wicked. Leafing through, I encountered a picture that could only depict the Cracked Meadow, of which Nanny Spencer had told me. Unable, in my terror, to look at it for more than a few seconds, I quickly turned the page."
And so, as our heroine explores the library, we meet another S: Surrey. If I recall correctly from earlier drafts of these novels: another S: Surrenity, will eventually emerge? There continues to be really beautiful description here, e.g. of theatre going and horse-riding, in addition to that quoted description of 'description'.
And Margaret in conversation with a maturely promising Miss Fletcher about things for older ears; yet another S seems to start emerging ('the goddesses hate lies'), i.e. Spirituality.
Perhaps we are complete now with our S's: Slaves, Spanking, Seasons, Sapphics (Surrenity?) and Spirituality (pregnant with many prospective, possibly bitter-sweet, facets of life in this 'fantasy' world)? -- A Conundrum.
Margaret Might (my expression). Might what? Mighty, how? She learns the facts and fanglements of life. A Symphony of Childhood. But one where I remain tussling with its imputations of behaviour that do not necessarily resonate with my own. An embroidery or tapestry which I, as reader, haven't yet used the potential skills of this world's needlepoint to create?
[Some men (or most?) in this novel seem to be fops, if not ponks (my word)!] (8 Jul 10, the author's birthday)
.
Chapter 5
" 'I tried to sew a field mouse balanced on an ear of wheat. Grandfather thought the gods might think we were asking for a plague of mice.' "
Corporal punishments from sergeant-major type ladies of instruction seem ever on the hair-trigger for our demure Princess. However not so demure, as she shows signs of ingenious methods of revenge - via embroidery - and revenge that actually goes beyond the realms of apparent reason ... alongside her less than secret delight! Much pungent description as well as copious easeful dialogue and in the background her horse - Star-Socks. And suspicions of Surrenity infiltrating the purlieus of Essex where Margaret is living currently and where such acts are more than just officially frowned upon?
I must say how much I am also enjoying the actual physical text of this book. It is a joy to peruse, with no right-justification and with paragraphing as empty lines rather than 'Return + Tab'. More books should be like this one, I suggest. (10 Jul 10)