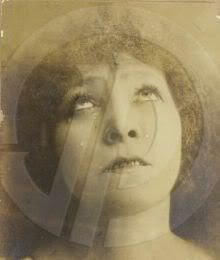 Sara came out tonight - as her namesake Bernhardt:
The farrago of the Office games was hard to understand. Surely the others eventually realised Deana and Sara were cheating because they had a secret mission. They do say Hell is Other People. An 'In Camera' Hell must be even more severe.
------------
Thanks, Marion. What I was trying to remember was being woken up in the middle of the night in midsummer to enact a New Year's Eve party with all its joyous singing etc. A bleary-eyed bizazz that beats any theatrical performance of real dislocation I've ever witnessed.
Marion, are you sure that object that hit Caroline's face - with such subsequent wild playacting injury - was not caused by her own throwing it in the air playfully and failing to catch it? I can't recall it being thrown at her by someone else.
I may not be commenting again till Sunday.
----------------
The Olympic ceremony was interesting, better than I expected, but I didn't notice the giant bed, as I wasn't watching the whole time. The scene leading up to the five rings in the sky reminded me of a Wagner opera.
Meanwhile, Brian was right: the interview was as chaotic as Caroline's hair: symbolic of a negative synergy that (as Marion also says) is a bit worrying with regard to the prospect of her mental health following this experience.
An interesting case-study, not necessarily one that was comfortable to watch. I said early on she was one to watch. It turned out that I was right for the wrong reasons. She'll never be another Nikki.
--------------------
Nothing to add to that, Marion. You created a very interesting review of a relatively boring episode.
A quote from Nina Allan's excellent story in TTA's Black Static #29 (which I am real-time reviewing at the moment):
“It is true that I have formed friendships, intellectual and sometimes emotional alliances that lasted a decade or more. But the ending is always the same: a boredom that finally becomes so oppressive that I am driven to fabricate some feud or schism that explodes the relationship apart.”
Life is just a slow-motion version of Big Bother, I'd say.
Or Big Brother is a micro of life's macro.
---------------------
Marion wrote: "Sara also decided a few tears shed wouldn't do her cause any harm. She related the tale of how she and her Mother helped a man with nowhere to go by giving him the only thing he asked for - food. She complained about the lack of help for people like him and wept. Cool as cucumber, Deana told her about poverty in India and how she should be glad to live in Britain where the poverty of India is unknown. She said people did not appreciate how lucky they are to live here and that she is proud to be British. This forced Sara into agreeing with her and re-establishing her Unionist and Royalist credentials. Deana took the drama right out of Sara's control and made her look silly. Oh, that Deana is a clever one!"
The box game was OK. But that bit Marion describes above was the most remarkable event, with lots of fleeting emotions over some people's faces, hard to read, inscrutable, but there nevertheless and interpretable in various ways, especially when Deana praised living in England or was it Britain, seemingly giving a right-wing salute as she said it? Ironic or sincere or subconscious or simply misinterpretable? Sara and Ashleigh were particularly inscrutable listening to Deana. Sara's Bernhardt tears returned and, already knowing about her extreme idiosyncratic Royalism, this model makes a very strange mix. Shall I ever fathom these people, as in a all great dramas and literature?
More significantly, can they fathom themselves?
------------------
I wrote a week or so ago: "In all the years I've been watching and commenting piecemeal on BB seasons, I don't think I've ever thought to compare the DR to a religious Confessional, with a priest (here BB) on the other side of the grille. With Scott's lengthy meticulous pickings out at his thoughts. Shievonne's eschatology described by Marion above. [I coined the word eschairtology recenty, as it happens (HERE in connection with a Reggie Oliver story)!] And I could go on with this analogy!"
(31 July) The BB authorities obviously been reading this thread and pinched the idea.
Actually, like Marion, I thought it was a very good task. A lot of home truths shining through the self-theatre.
Sara seems to be growing middle-aged phsyically and mentally as day follows day in the House.
I still think Essex girl Ashleigh is a good bet for the eventual winner.
Deana's 'improvement' speech was well thought out and delivered.

Posted by Nemonymous at 8:47 am