After my reading yesterday of Sam Dekker's high mystic encounter with the Grail in the remarkable 'Is it a Tench?' scene, today's quoted passage from 'The Glastonbury Romance' (1933) by John Cowper Powys brings us down to earth - or does it?

"Poor old Abel had been suffering of late from two most vexing physical maladies, either of which would have rendered him miserable, but which together broke down his spirit. One was his villainous constipation, and the other a still worse attack of piles. With the utmost difficulty, under the encouragement of his faithful crony Number Two, the old man had been persuaded to go to the hospital clinic; but the slap-dash methods of the internes, and an interview, in an ether-smelling corridor, with the competent Aunt Laura, had sent him home trembling with nervous indignation, and resolute to confine himself henceforward to his own private remedies -- Beecham's Pills for the first trouble and copious Vaseline for the second."

'internes' is sic. A vague premonition of 'internet'?


PS: One wonders if the tench was meant to relate to the stench (!) that must have accompanied Sam's application of the enema on Abel Twig and the conveyance away of the then full chamber pot past the stew cooking in the kitchen. The two events: the enema and the grail are more or less connected explicitly by Powys in this section. Or was it the chamber pot and the grail?

All my previous quotes linked from here: http://weirdtongue.wordpress.com/quotations-from-the-glastonbury-romance-by-john-cowper-powys/

Some later comments on my Facebook: IS IT A TENCH?
DB: Des indeed... one of the weightiest, most profound questions in all fiction.
JBC: Is that a fish?

Des Lewis Yes, but David is right.
JBC: To sum up. In this fiction either the narrator or a character asks the reader or another character of a tench, asumed to be such in the fiction, is it a tench and that's the weightiest question in all fiction? I'd ask David to expatiate but he might and it might be lengthy and I'd have to wait till he finished while all the time believing otherwise and not expecting my mind to be changed by him. Oh! he's being ironic. Is he being ironic? You don't hink he is. I'm throwing this fish back.
Des Lewis This is another Facebook post by DB on a different thread: [[hmmm...... I've always thought the repeated "is it a tench?" question was emblematic of the tendency to respond in an almost ridiculously matter-of-fact way to something absolutely transcendent; and the conjunction of the grail scene with the enema scene a parallel but not exactly comparable pairing of the most elevated with the most base. Both seem to me to embody profound truths about human experience and reaction. I'd not matched "tench" and "stench" though... that's interesting too.]]

Des Lewis I then added a linkage between the Holy Grail scene (is it a tench?) and the Chamber Pot scene (where the results of an enema are put).

JBC: The question's repeated? The author was imputing to the character doubt of his eyes and understanding of the obvious (though one fish might look much like another, but not if he's repeating the question). Something's being imputed. It can't be a matter-of-fact way, because of the repetition. Could be a neurotic tic. How the fuck's a tench transcendent? of fishy Xianity? Oh well, it would, in Glastonbury and that myth of Joseph Arimathea, and the grail, but only if you're predisposed yourself to invest with transcendence (which I wouldn't be). But the author presumably is, so might be pairing what he thinks most elevated with the base (though I might make a closer pairing that the grail itself or at least its contents are emetic.) Is it David not matching tench with stench or the author? Matching fish with cunt, perhaps? intentionally or unconsciously?
Des Lewis I think I am the only one linking tench and stench, grail and chamber pot, although Powys seems to indicate in the text some form of linkage. I read this book first in 1976 and again this year(am still reading its 1200 close-printed pages). If you're not mystical or of a transcendent frame of mind before you start it, I 'Pascal's wager' that you will be by the time you finish it?
Des Lewis Someone seems to have asked the same question - quite innocently? - on this cooking forum here: http://playstuff.net/showthread.php/3756-Cooking-(not-a-nVidia-graphics)-thread/page3 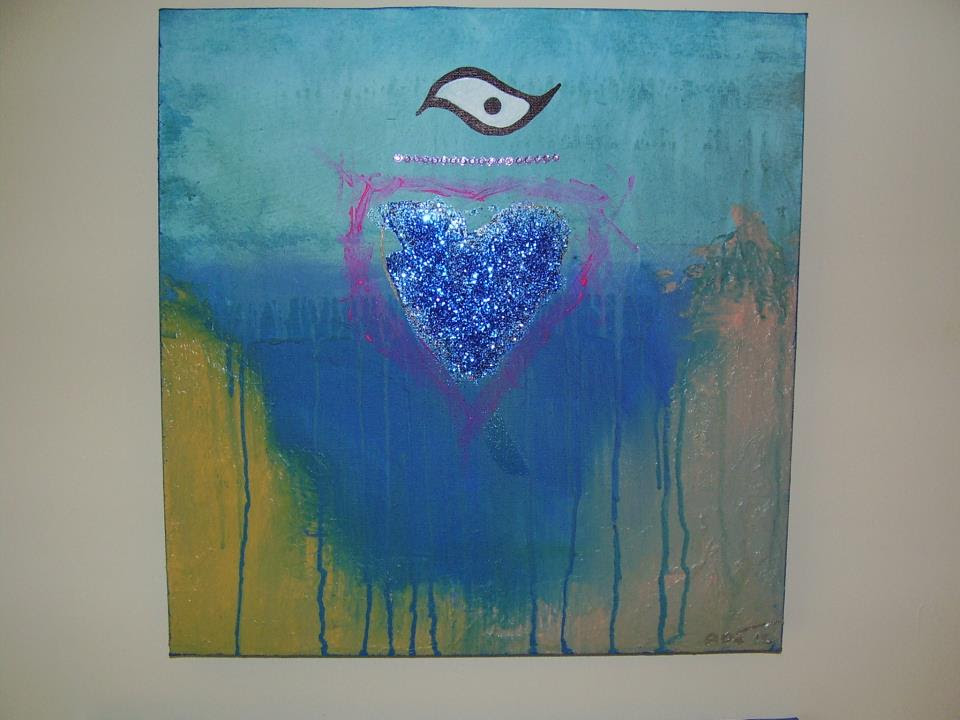 Untitled Painting by Ade Hodges
Posted by Nemonymous at 1:53 pm

Today's quoted passage during my re-reading of 'The Glastonbury Romance' (1933) by John Cowper Powys:

"'Is it a Tench?' he kept muttering quite audibly. What he was always reverting to in his thoughts was the necessity he was under to tell everybody in Glastonbury that he had seen the Grail; and several times he stopped various errand boys and tradesmen's wives, whom he knew by sight, and began to tell them, or began to gather himself up to tell them, but by some queer psychological law they seemed inevitably to slip away from him before he had forced them to listen to him. He came by degrees to have that queer sensation that we have sometimes in dreams, that everything we touch eludes and slides away. He even got the feeling that the pavements were soft under his feet and that the people he passed were like ghosts who moved WITHOUT MOVING THEIR LEGS."