Marion wrote:
One of those moments which make BB the greatest reality TV show on earth. JJ crumbled.

Although I agree with that, I'd interpret last night's momentous events in more of a theatrical, inevitable nemesis of all the HMs (some returned to face this Fate), of BB in general over the years, of our society in the last ten years, as crystallised in John James, John James as the redemptive anti-Messiah whom Dave may sub-consciously see as a Charismatic, evangelical archetype of Biblical darkness. (Lucifer is now generally perceived in modern times as the 'hero' of 'Paradise Lost' by Milton.) Apocalyptic John, Apostle James. Fisher of folk. Null Immortalis.

Corin is just a player in this Morality tale, just one of the Greek Chorus, albeit the most effectively vocal.

Meanwhile, Josie could win BB11, based on her performance last night, not Corin. Josie was the Judas Iscariot.
.
Josie was crueller by wielding the dagger from under the the love-blanket. Josie is the Queen of Hell.
Corin is merely taking small paces with exquisite skill, but small paces nevertheless. She's not in the same league as Josie.

But I hope that Corin replaces John James in going so as to punish her for her camera-gazing.
.
Steve goes, as expected. Quite a dignified exit.

I wonder what he said to Mario after he heard Mario calling him 'pervy'!

I think Nathan was given a speech to read on the telephone.

Josie was very articulate about John James' behaviour. I really think she now deserves to win.

Yes, I'm fickle. Corin has begun to grate with me again. She just doesn't ring true.

Well, none of them really ring true but she rings postively false.

John James will now go, and JJ and David?

But if others agree with my view of Corin, perhaps she will go tonight.

And oh yes - Bob Righter - as a real body - absolutely brilliant. Stylishly creepy. A perfect symbol for BB11.
.
I agree that the programme is going to be boring. I feel none of them deserve to be there, and I would have said that whoever had got through. A pity BB is ending as such a damp squib.

Sam and Corin and John James should perhaps have been there for talking points and potential entertainment. But people vote for various reasons, some for those with less fakery about them, some for those who have more eye-candy, some as a result of flashmob voting organised by supp0rters and other reasons of an unpredicatble nature (what paper they read, their IQ, their politics etc).

Josie does have something of the Doris Day about her, and the Carroll Baker. She is sometimes articulate and funny. With the competition she's got, I can't see who else may win. Except possibly Mario. Even Dave? He's improved with time even with the Glory-Hole of his religion.
.
John James in DR: I've acted like an opinionated prick.

BB: How do you think you will be remembered, John James?

John James: Well, I can't think of any way I'll be remembered other than as an opinionated prick because - err - because I am an opinionated prick. (stares mindlessly into the distance)
.
A classic - Josie evicting two biscuits, a custard cream and a rich tea. A born comedienne. :)

Not sure about Mario starkers, though, or that rather childish, if gently humorous, forgeone conclusion of a task involving Andrew as a yes man. But I wonder - does he really fancy Mario? There's more truth in subterfuge than meets the eye.

This is the calm before the storm, ie. the Housemates of Horror are due to arrive at the House next Tuesday...
.
Sorry for the intermission but this new book of mine does mention the 'Big Brother' TV reality Show:
Weirdtongue (by DF Lewis)
Just received my contributor copies from InkerMen Press. 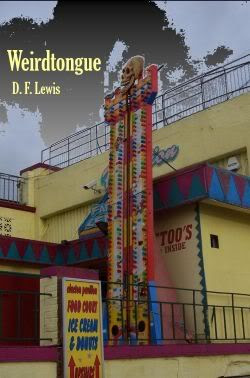 Still - Josie's 'glow' is accentuated when compared to her sliding into spittly thumb-suction and then tenting her knickers in imitation of JJ's boner. A glow aglow is more greatly aglow when within darkness.

She does have a 'glow'. Something one possesses naturally and cannot really acquire by deliberation or fabricate by acting. In that respect, she's streets ahead of Corin. Glow a good word. Thanks, Dave. Dave for second?

That highlights show is symptomatic of what has been wrong with the whole BB 11 series - in the old days the HMs were marooned with each other; throughout this series they have been beset by others who are not HMs. That & the retrocausal special effects.

Tonight is the BB Final I've least looked forward to.
.
Josie won with nearly 80% of the votes....
Dave, in the end, a worthy second.

Nasty Nick is a mystery to me, therefore.

I agree that Chantelle has not changed objective shape bodily or facially but still gives the impression she is now a bruised windfall. And Preston has grown an aura of bounder or cad or brush salesman of the old school, while before he was a pop star whippersnapper.
.
...and, Marion, where is Miche the Moucher from the year we started discussing BB on TTA (2004)?

And here are three of my separate comments on Makosi in 2005:

And Makosi is a visual and mental delight, clever and incisive.

Makosi is a star! And she has created some of the bext drama on TV since 'The Wednesday Play' !

My first real laugh in this series - seeing Makosi lead the conga with Science at the back.
.
Unaccountably, I woke up this morning thinking of mutton sausages.

LOL! at Marion's concept of John McC as a cupid in a diaper.

Makosi vs Nadia as the battle of the Divas? I'll take on Makosi, if Marion takes on Nadia, because I have a death-wish appropriate for the dying days of BB.

Nikki and Nick - John and Coolio - as catalysts of as yet unknown tree-rings or DR about-faces.

Prestelle as just another misbegotten publicity germ like that of mutterden JosiJJ.
.
Tearful Chantelle and Josie.
Might not see tomorrow's show....

Does anyone know what were the 'circumstances' of the break-up of the Chantelle / Preston marriage? They still seem to care for each other.

Josie is 'normal' she claims. She's not a celebrity. She is a celebrity now, my own Doris Day.... :(
.
Spot on, with everything there, Marion, including the mutton chops. What a sight! McC is even less scenic than me!

Meanwhile, which grizzled curmudgeon to go?
.
How ludicrous can you get!
Fabrication upon fabrication - notes left in places for someone else (not a genuine HM) to find? What's all that about?

The whole lot are silly.

Has BB come to this?

All of them to go!
.
All is forgiven. Mr Snuggles is the most horrific clown I've ever seen - beyond anything even in King's IT.
Poor Nikki!

She's on toast.
.
Baked beans and toast?
Victor & Michelle?
One should be on top of the other, and the other should not.


PS: If anyone is interested in the Horror genre on this discussion forum, they should take a look at the first entrance of Mr Snuggles. Beats any Horror film hands down.
It only needs Bob Righter strutting backwards to be seen at the edge of sight...
.
This below is what I wrote in 2004:

I was very upset at the eviction of Victor on Friday. He was a greatly misunderstood character - and the way he sometimes 'performed' (and created whirlpools of mannerist theatre around him) I felt the whole thing was a wonderful Tennessee Williams play. Miche the Moucher is a likely bunny-boiler. Hope she doesn't read this thread. She knows where the bodies are buried.
Actually, BB is symptomatic of a lot of what is wrong with life today. Swearing, loose morals, blatant exploitation etc. However, paradoxically in a way I can't really explain, it also seems constructive, semi-dramatic, inspiringly nightmarish, thought-provoking in its development of one's own insights into the psychology of the modern angst. The question is what one does with those insights. Turn it by alchemy into art (writing)? Or allow it to help you understand and help yourself and others in this human jungle?
Yes, Dan was and has always been very impressive.
Shell the 'posh eye-candy' gets on my nerves.
Nadia is improving all the time.
Stu and Jason are also-rans in my book. Never liked Jason ever since he started in the house (dressed only in a (what do they call it?) ... thong).
Stu was subsumed by Miche the Moucher and now remains a Charwoman's Shadow (a la Lord Dunsany)